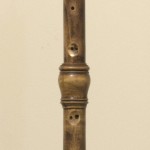 It corresponds to the mezzosoprano of the oboe family.  It was popular in Germany from about 1710 until the 1730’s decade;  during this period composers such as Telemann, Graun, Heinichen and specially J.S. Bach featured its soft sound in concerti, chamber music and sacred works.